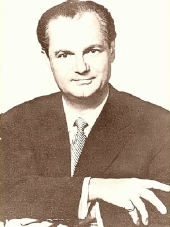 
Peter Anders (July 1, 1908 - September 10, 1954) was a German operatic tenor who sang a wide range of roles in the German, Italian, and French repertories, he began singing lyric roles and later undertook heroic roles with equal success.

Anders was born in Essen and studied at the Berlin Music Academy with Ernst Grenzebach, and later privately with Lula Mysz-Gmeiner, whose daughter Susanne he married. In 1931, he appeared in Berlin in La belle Hélène, and made his operatic debut the following year in Heidelberg, as Jacquino in Fidelio.

He made a few guest appearances at the Royal Opera House in London, La Monnaie in Brussels, the San Carlo in Naples, the Glyndebourne Festival.

He sang not only an impressive range of operatic roles, but also several operetta roles. He sang regularly on German radio and in concert, he was also active in oratorio and lieder.

He became a favorite of Adolf Hitler's regime and was not required to serve in the armed forces - instead entertaining the troops and participating in propaganda events, which in the post-war world tainted his reputation.

While at the height of his career, Anders tragically died in a car accident in Hamburg at the age of 46.