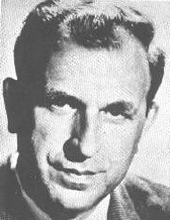 
Hans Hotter (January 19, 1909 – December 6, 2003) was a German operatic bass-baritone, admired internationally after World War II for the power, beauty and intelligence of his singing, especially in Wagner's masterpieces.

Born in Offenbach am Main, Hotter studied with Matthäus Roemer in Munich. He worked as an organist and choirmaster before making his operatic debut in Opava in 1930.

He performed in Germany and Austria under the Nazi regime, but was unable to pursue an international career until his Covent Garden debut in 1947. After that time, he sang in all the major opera houses of Europe. He made his Metropolitan Opera debut as the title role in The Flying Dutchman (in English) in 1950. In four seasons at the Met, he performed 35 times in 13 roles, almost all Wagnerian.

Probably his best known vocal achievement was his Wotan in Der Ring des Nibelungen. Just in time to capture him in something like his prime vocal powers, his interpretation of this character in the operas Die Walkure and Siegfried was documented as part of the first commercial recording of the cycle in the early 1960s, with conductor Georg Solti and record producer John Culshaw. He also directed a complete Ring at Covent Garden from 1961 to 1964. His magnificent portrayal of Gurnemanz in Parsifal was preserved on record in Hans Knappertsbusch's second live recording at Bayreuth; in his old age he switched to the same opera's briefer, and less demanding, part of Titurel (also captured on record).

A much-admired Hans Sachs in Die Meistersinger von Nürnberg, he nevertheless preferred to sing the smaller role of Pogner, because its range was better suited to his voice. He was also celebrated for his Pizarro in Beethoven's Fidelio, of which a live 1960s recording from Covent Garden was issued for the first time in 2005.

Although his international fame was almost entirely in the German repertoire, in Germany itself he was also known for performing Verdi in the vernacular and was, for example, a popular Falstaff and a formidable Grand Inquisitor in Don Carlo.

As a Lieder singer he had few peers. Among German male singers of the 1950s and 1960s, only Dietrich Fischer-Dieskau commanded such widespread admiration and affection. Hotter, like his younger colleague, brought a true feeling for words as well as music to the songs of Schubert, Schumann and others.

Hotter retired from the stage in 1972, but made occasional appearances in small roles thereafter. He was a notable narrator - a spoken part - in Schoenberg's Gurrelieder, a role he continued to take well into his eighties.