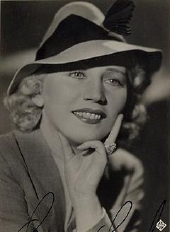 Erna Sack's maiden name was Weber, and as a child her voice attracted attention both at school and in the church choir in which she sang. In 1921, Erna married Hermann Sack. She studied at the Prague Conservatory, and later in Berlin with Oscar Daniel.

She received her first break aged 30, when the wife of conductor Bruno Walter happened to hear her at one of her lessons and persuaded her husband, who was then the musical director at the Berlin State Opera, to audition her. Subsequently she joined them and between 1928 and 1930 she sang many small roles with this famous company, including parts in the 1929 local premiéres of Ermanno Wolf-Ferrari's Sly, on 11 May, Eugen d'Albert's Die Schwarze Orchidee on 9 June, and Mark Lothar's Tyll on 1 September. At the same time she recorded several small roles in operas for Berlin Radio. But Walter advised her to gain more experience in provincial opera houses and to enlarge her repertory.

Her career really started in high gear in 1930 when her uncanny ability to sing those stratospheric high notes, including c4 (C above high C. (Richard Strauss later wrote a new cadenza for her high voice, for her to sing as Zerbinetta in Ariadne auf Naxos).

In 1931 she sang Norina in Gaetano Donizetti's Don Pasquale at Bielefeld, where her voice made a great impression and her gifts immediately recognised. The Wiesbaden Theatre engaged her in 1932, and in that year she also made several radio broadcasts and recordings. In 1934 she was engaged by the Breslau Theatre, where he roles included her first Zerbinetta in Richard Strauss's Ariadne auf Naxos, and the following year arrived at the Dresden State Opera, where she attracted the attention of Karl Böhm and, above all, Richard Strauss. In 1934 she also made a spectacular return to Berlin, appearing as Gilda in Giuseppe Verdi's Rigoletto alongside Heinrich Schlusnus as the Jester and Walther Ludwig as the Duke. The conductor was Erich Kleiber.

In 1935, Erna Sack made her first series of concert tours, to Austria, the Netherlands, the French Third Republic and the United Kingdom. During the same year, she signed her famous exclusive recording contract with Telefunken. She appeared in the world premier of Strauss's Die Schweigsame Frau, a role in which her special commitment earned her the gratitude of both Strauss and Karl Böhm. As a result she was invited to sing the part of Zerbinetta under Strauss' personal direction when the Dresden State Opera visited the Royal Opera House, Covent Garden, London, in 1936.

From this point onwards Sack's career took off. She seemed to work tirelessly, at the opera, in concert tours, and touring, including to Rome where she appeared in Wolfgang Amadeus Mozart's The Magic Flute with a cast that included Tito Schipa and Licia Albanese, Copenhagen, Oslo, and, for the first time, the United States, where she shared a platform at Carnegie Hall with Joseph Schmidt and Richard Tauber (24 October 1937) singing a duet from Franz Lehár's the Merry Widow. She had some difficulty, however, when asked to sing at the Lyric Opera of Chicago, being asked to sing the roles of Rosina and Donizetti's Lucia in the Italian language, because she argued that she had not had sufficient time to re-learn those roles in their original language (throughout Europe at that time operas were largely sung in the tongue of the nation in which they were being performed).

After World War II, Erna Sack toured extensively and was particularly successful in Latin America, especially Brazil, Argentina, Uruguay, and Chile, (with the result that she and her husband took Brazilian citizenship). But it was in Canada that she enjoyed her greatest post-war successes and for a number of years the couple lived in Montreal. She later toured South Africa, and even South-West Africa, and returned to West Germany in 1950.

In 1953, she carried out an extended tour of the Federal Republic of Germany and West Berlin, a marathon undertaking involving over 40 concerts that was followed that autumn by a major tour of Australia and New Zealand. In the autumn of 1954 she celebrated her return to the United States which included a triumphant appearance at Carnegie Hall. She ended her concert career with one final tour of West Germany in the autumn of 1954 and a brief tour of East Germany in 1957, and then withdrew from public life.

Erna Sack also appeared in numerous films produced in Germany such as Blumen von Nizza (1935) and Nanon, the latter being one of the most famous operettas produced in this period. Throughout her career Erna Sack recorded profusely, first on acetate, then, starting about 1935, on the new German invention - BASF magnetic tape. Recording on tape proved to be infinitely superior to disc and very considerable quantities of those recordings were later transferred from 78s to Long Playing records (LPs). Today several companies are producing fully remastered Compact Discs (CDs) of Erna Sack, including, of course, Telefunken, and the French company LYS. ARCHIPEL has also produced recordings of the Carnegie Hall performances (the Americans, however, still recording on acetate).

She died in a Mainz clinic on 2 March 1972 following an operation for cancer.