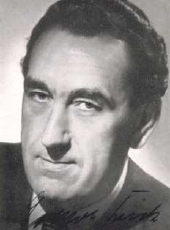 
Gottlob Frick (born Ölbronn, Germany, 28 July 1906 - died Muhlacker, Germany, 18 August 1994) was a German bass who sang in opera. He was known for his wide repertory including Wagner and Mozart roles, as well as those of Nicolai and Lortzing.

He was a member of the chorus at the state opera in Stuttgart 1927-1934. His first solo role was in Coburg in 1934, followed by Freiburg (1936) and Königsberg (1938) where he was spotted by Karl Böhm and engaged for the Dresden State Opera, which was his base for the following decade. In 1950 he moved to the Deutsche Oper Berlin and his international career took him to all the leading houses in Europe.

His voice, instantly recognisable, was aptly described by Wilhelm Furtwängler as 'the blackest bass in Germany' ('den schwärzesten Bass in Deutschland').

The roles for which Frick was best known were Osmin, Sarastro, Kaspar, Rocco, Philip II, and above all the great Wagner bass parts including Pogner, Daland, Hunding, Hagen and Fasolt. Perhaps surprisingly he avoided the role of Richard Strauss’s Baron Ochs, which might have been thought ideal for him.

He retired in 1970 from the stage, although a few of his recordings (for instance, his portrayal of Gurnemanz in the Solti-led Parsifal) date from after that year.