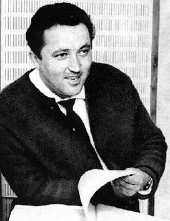 
Fritz Wunderlich (September 26, 1930 - September 17, 1966) was a German tenor, born in Kusel, Rhineland-Palatinate. His mother was a violinist and his father was a choir-master. The family lived with difficulties especially after Fritz's father committed suicide when Fritz was five years old. The story regarding Wunderlich's discovery parallels many of his contemporaries (notably Nicolai Gedda and Dietrich Fischer-Dieskau). As a young man Wunderlich worked in a bakery. At the insistence of neighbors and passers-by who had witnessed his musical gifts and beautiful voice, Wunderlich decided to begin studies in Music. He managed to obtain a scholarship in order to pursue his studies at the Freiburg College of Music where he studied French horn and voice.

Wunderlich was soon noted as a brilliant young tenor, especially in Mozartian roles, but he later expanded his reach to the full range of the lyric tenor repertoire. It was the fashion during Wunderlich's career for German theaters to perform operas in the local rather than original language. Therefore, most of his recordings of the standard operatic repertoire are sung in German, including Verdi's Rigoletto and Don Carlo. Wunderlich achieved the highest distinction within the German repertory. Of special importance is a recording of Mozart's Magic Flute in which Wunderlich stars as the Prince Tamino opposite famed baritone Dietrich Fischer-Dieskau in the role of Papageno.

Wunderlich's crystal-clear voice and intelligent, restrained interpretation also led him to impressive renditions of the Lieder cycles of Schubert and Schumann; of special note are his collaborations with pianist Hubert Giesen. His famous recording of Dichterliebe, Schumann's most beloved cycle, remains the golden standard of this genre. Many tenors since have emulated Wunderlich's interpretation of this cycle; noteworthy examples include John Aler, Stanford Olsen and Robert Swensen.

Wunderlich's promising career was cut short by an accident: he fell from a stairway in a friend's country house in Oberderdingen near Maulbronn, and died in the University Clinic of Heidelberg just days before his 36th birthday. He is buried in Munich's Waldfriedhof cemetery. In 2008, Wunderlich was voted the fourth greatest tenor of all time by BBC Music Magazine.