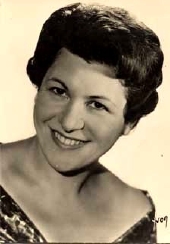 A coloratura soprano, she had an exceptionally wide vocal range; she hit D4 above high-C in live performance in Vichy (D7 in scientific pitch notation or about 2349 Hz. Amongst her roles stand Lakmé, which she recorded for Decca Records in 1952, Lucia di Lammermoor, Olympia in Les contes d'Hoffmann, Gilda in Rigoletto, Rosina in Il barbiere di Siviglia, and Leyla in Les pêcheurs de perles.

A star of television and radio in the nineteen-fifties, she was well known in France. In 1954 she went to San Francisco to sing Lucia and Gilda, and had a successful tour of the Soviet Union with 16 concerts over a few weeks.

At 17 she married Alan Smith, an Englishman, who died shortly after World War II in a car crash. She had one daughter. Mado died in Paris in 1960 from cancer (some sources state liver cancer, others leukaemia) a few days before the 1500th performance of Lakmé at the Opéra-Comique, which had organized the event for her birthday. Her colleagues and relatives remember her as the sweetest and least diva-behaved of women.